A month before the party, is celebrated the “Tallada deth Taro“. An expedition of men of the village go to get the taro, load it to the town and prepare it for burning. On the day, it sets alight and dragged through the streets and squares of Arties, accompanied by music and the cheers of the audience on a until the first hours of the morning and let them just in front of the mayor’s house.

According to tradition, the ashes of taro protected, purified and fertilized, so they are scattered all over town to make evil spirits go away.

Origin and development of ritual

Since ancient times, when the summer solstice arrived, were held in the Pyrenees four very widespread rites: the purifying fire through the halhes and haros; taking the dew especially for its miraculous virtues; collect the plants that have received the dew and that also acquire healing properties, and playing hide on a night in which the woman was equal to man and had everything allowed. 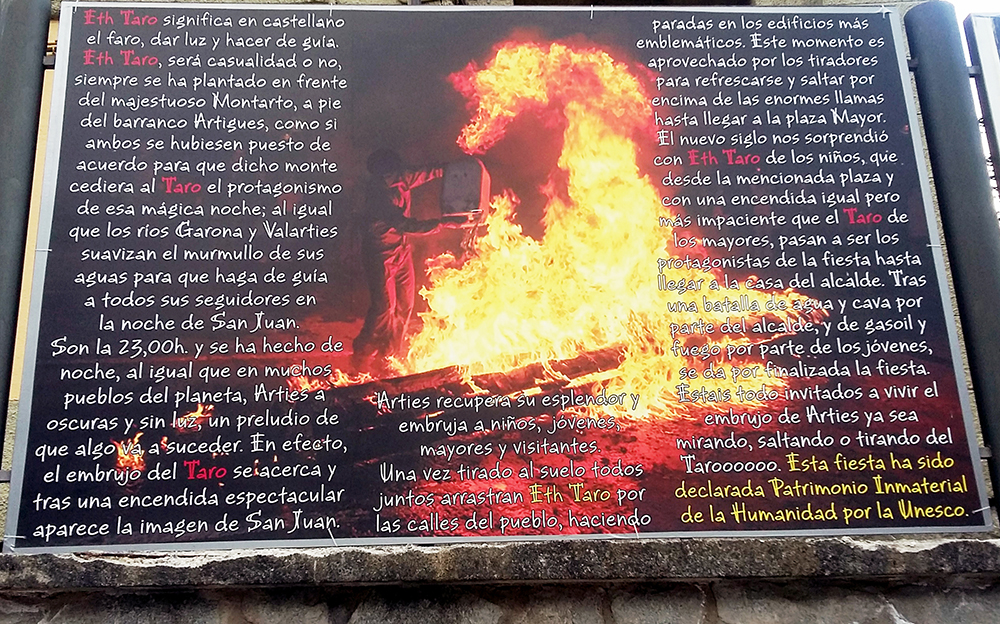 The rite of fire, which has its beginnings in pagan ceremony that was made in honor of the Sun God, -called Abelio in the Val d’Aran and Cominges- eventually joined the Christian tradition and in some localities has remained to this day. It involves burning trunks during the shortest night of the year and the fire symbolizes the change of the solar cycle when the decline of the day begins. Les and Arties, trunks called Taros an haros are trees of about 12m high.

With this ritual is pursued, purification and burning evil spirits -which in the Val d’Aran we call “erulets”- and everything that brings misery and disease to humans and animals. A portion of the coal and ash was carried to houses and stables to spare evil, and some orchards and fields to ask for good harvest.

In December of 2015, the Intergovernmental Committee of UNESCO has declared the Hèstes Der Huec of the Pyrenees as Intangible Heritage of Humanity. This documentation includes 63 fire festivals held during the summer solstice in the Pyrenees, including the crèma deth Haro de Les and la crèma deth Taro d’Arties, both in the Val d’Aran.