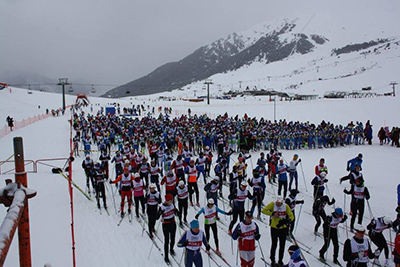 The Marxa Beret, which this year reaches its 41st edition, will be held on 1 and 2 February in Baqueira Beret, the ski resort of Val d’Aran.
On Saturday, 1 February, the Sprint Salomon will take place, which will once again be the “Spanish Sprint Championship” in the free technique category. On Sunday, February 2, the 41st edition of the Marxa Beret will take place with the distances of: 42, 21 and the popular 10km. This race is included in the FIS calendar of popular races, the Spanish Long Distance Championship and the Spanish Cross-country Ski Cup.

The Marxa Beret is one of the most consolidated Nordic ski races in Spain, with more than 1,000 participants from all over Europe every year. This popular march has become the Nordic ski festival.

Online registration is now officially open and must be done through the Marxa Beret website until 31 January. Face-to-face registration will take place at the Shelter House in Salardú on 1 February. It should be remembered that the registration fee will increase as the date of the event approaches.