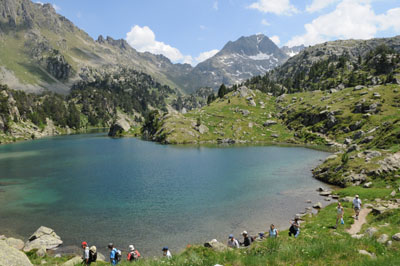 Colomèrs, the largest glacial lake circus of the Pyrenees is a mountain range formed in the shape of a circle which holds in its basin nearly 50 lakes (estanhs). The slow, but efficient process of erosion of ice from the glacier era left behind the legacy of an incomparable landscape: a place of high mountains with high and steep peaks of around 3000m, as the Creu de Colomèrs, the Gran Tuc de Colomèrs and Tuc of Ratera . This is one of the most recommended destinations for hiking in the Val d’Aran that can be accessed via two routes of great scenic beauty.

Salardú approach from the Bank of Aiguamòg, peripheral zone of the National Park of Aigüestortes and Sant Maurici, allows us to enjoy landscapes of pastures, meadows, forests, rivers and lofty peaks. In the middle of the valley are the Bahns of Tredòs, ancient baths recovered in 1988 whose sulphurous waters constitute a part of the bather tradition healing waters for Aran, which have always been well hot springs in the mountains of Upper and Lower Aran . Here we park the car and continue the route to the lakes of Colomèrs, on foot or on one of the seven-seater taxis that make the path to where the forest trail arrives.

Route from Arties by the the Bank of Valarties

High mountain valley with the presence of the emblematic Tuc deth Montarto (2833m.) From Arties, leaves the trail that goes along the valley of Valarties river until, about 6 km from the village, a small track on the right that leads to a recreational area located at the foot of a dam. From this point it is mandatory to leave cars and can only continue with SUVs and always with the prohibition of parking on the rest of the track.

Curiosities of the environment

Rocks in this area are large blocks of granite placed in isolated places that were carried by the glacier.

As plants native to the area include gentian (gentian acaulis), blue violet, which extends its roots underground and from one plant out very scattered flowers; and monkshood (Aconitum napelus), one of the most toxic known, deadly even in small doses. It was used as a soothing poultice for gout and rheumatism.

We recommend you make the routes with the expert guides associated to Torisme de Val d’Aran.  Just book with them the route that best suits your interests.